A Doorstep in Gerrard Street

Posted on 21 October 2014 by adrianprockter

Above: Looking west in Gerrard Street.

Many Londoners have enjoyed an authentic Chinese meal in Gerrard Street. With large, colourful entrance arches at each end of the street, stone dragons half-way along the street and the Chinese Pagoda at the eastern end, it certainly has all the ‘trimmings’ that you would associate with a ‘Chinese Quarter’. Gerrard Street has become synonymous with the Chinese community in the West End of London. Either side of the street it is lined with Chinese supermarkets, Chinese bakeries and, of course, Chinese restaurants. There are so many restaurants that they have ’spilled out’ into the neighbouring Lisle Street.

If you have not known these two streets since the 1960s you could be forgiven for thinking that it has always been associated with the Chinese community in London. In fact you would be wrong. In the 1960s there were a few Chinese restaurants in the nearby Wardour Street and a regular Chinese assembly meeting for a weekly service in their native tongue in the Roman Catholic church in Soho Square. Some Chinese families have lived within the cosmopolitan boundary of Soho for a long time but the great influx of Chinese came in the 1980s. Before that, the Chinese community traditionally lived in the Limehouse area of East London.

As you walk down Gerrard Street today, all you will see at ground level are the brightly coloured terraces of shops on both sides. Apart from a Bookmaker and a few other non-Chinese shops, they are all related to food shops or restaurants. If you look up, above the names of the shops you will quickly realise that the buildings are Georgian or Victorian and look very similar to many other terraces in London of that period.

Going back to the early 1900s, the street was still mainly residential. It was lined with houses with normal ground floors and front doors opening out onto Gerrard Street. If you can find number 43 Gerrard Street, you will see a plaque recording the fact that John Dryden (1631–1700) lived for several years at this address.

It was not a particularly grand street but it was a respectable address at which to live. Similarly with Lisle Street which has houses of the same style and was also residential. 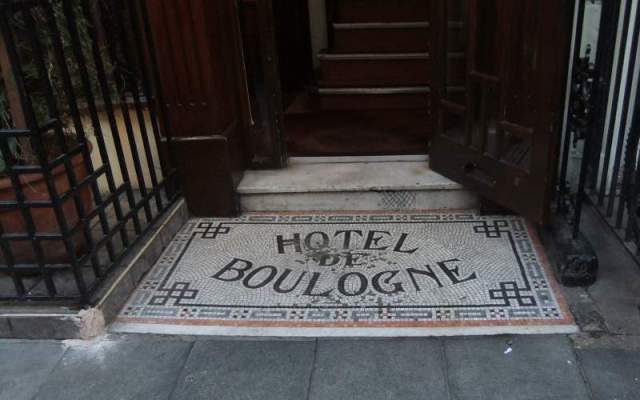 Something which is all to easy to miss is a doorstep mosaic at number 27, which was the premises occupied by the Hotel de Boulogne. The hotel was built in 1783 and opened the following year. The leaseholder was a certain Philippe Ganosse, a Frenchman born in 1843, and who, according to the 1881, census had his residence at nearby 84 Dean Street.

Following the death of Philippe, his English wife Kate and later on their daughter Eugenie Elise Jeannette took over the business. The Hotel de Boulogne was certainly popular. Around 1910 the ground floor front was glazed in Art Nouveau style. However the First World War must have dealt it a serious blow. The hotel closed in 1917, only to be replaced one year later by the Restaurant de Boulogne. Documents of the 1920s and 1930s point to a growing presence of Italian interest in the building itself and the running of the restaurant. In 1962 the Restaurant de Boulogne was still occupying the premises and may have continued for a few more years. By the mid-1970s, many of the traditional businesses of Gerrard Street were closing down and were replaced by Chinese restaurants and shops.

The mosaic is a little reminder of very different times in this busy street. This is the fascination of London that its past history lingers on – if only you have sharp eyes to notice it!