Posted on 19 January 2015 by adrianprockter 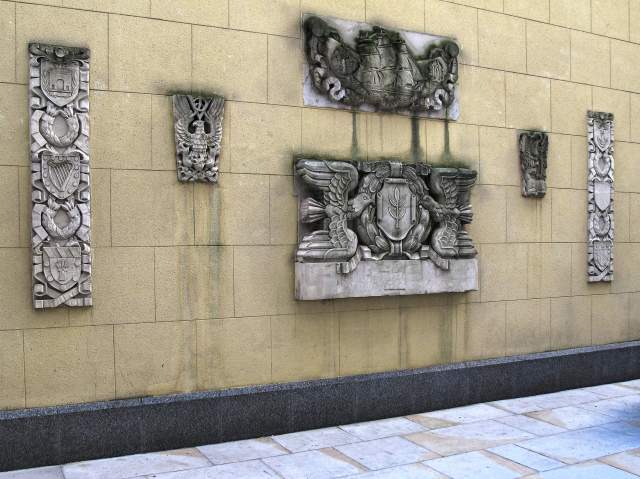 Above: A selection of decorated masonry on the wall at Post Office Court.

Post Office Court is a narrow passageway running south from Lombard Street and linking with King William Street. On the west wall are some unusual pieces of masonry. The Corporation of London lists the following information:

‘These sculptures elements were installed here in 2003-04. They were decorative elements of the building previously on the site at 10-15 Lombard Street/ 83-36 King William Street and it was a condition of the planning permission to demolish the building and build a new one that this stonework was salvaged and reinstated as part of the development. The stone panels were previously over doors and entrances to passageways across the site.

‘The previous building on the site was in Portland stone, constructed in 1938-40, designed by Whinney Son and Austin Hall.’ 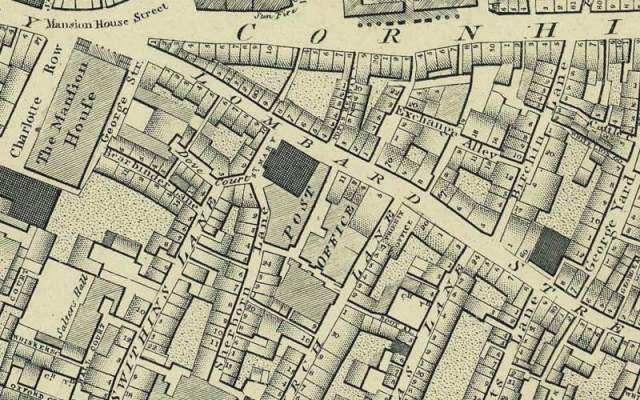 Above: Part of Horwood’s map of 1799 showing the site of the Post Office on the south side of Lombard Street. Remember that King William Street was not cut through until the 1820s so that street is not shown on the lower part of this map.

The first General Post Office was set up in the City of London in 1548. Its site was in Cloak Lane, a narrow street running west from Dowgate Hill.

In 1637 it was moved to Abchurch Lane, a narrow street running north off Cannon Street.

The building was destroyed in the Great Fire of London, of 1666. Immediately afterwards Crosby Hall, in Bishopsgate,  was used a temporary premises.

In 1688 the General Post Office was set up in large buildings at the eastern end of Lombard Street (see Horwood’s map above). On that site is a a modern building with a pedestrian passageway passing through it called Post Office Court.

In 1825, requiring much larger premises, the General Post Office was moved to a new site at St Martin’s le Grand. Those buildings remain although they are now in use as offices.