Posted on 26 January 2015 by adrianprockter 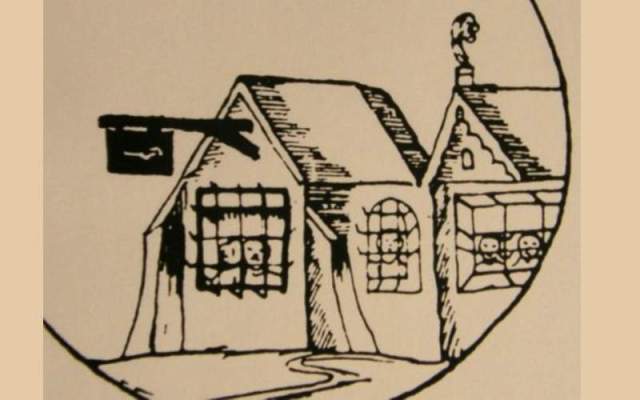 Above: Drawing of the prison in c1578

‘In the Clink’ or ‘In Clink’ is a phrase known throughout the English-speaking world meaning ‘to be locked up in prison’. To many people it conjures up a grim overbearing prison, probably with overtones of stories we have heard about places like Newgate Prison.

The Clink Prison was, in fact, a small prison owned by the Bishop of Winchester. It stood his land beside the Thames, in Southwark. The land was known as the ‘Liberty of the Clink’. It was probably a sub-division of King’s Manor, owned by the Bishops of Winchester from 1107. The word ‘Clink’ is derived from a Flemish word for a ‘bolt’.

The small building remained on the land from about 1162 until it was destroyed in the Gordon Riots of 1780.

As far as prisons go, it was not among the grimmest of places of incarceration. Surprisingly, little is known about it and even less is known about the people that were lock up there. Similarly, very few images of the prison are known to exist. 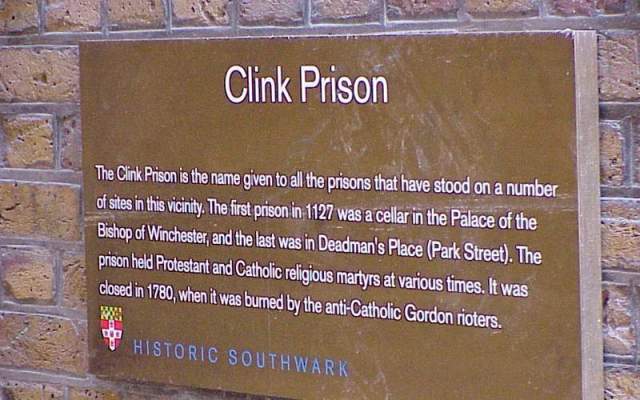 Above: A brass plaque, situated on the north side of Clink Street, almost opposite the tourist attraction called the ‘Clink Prison’. There is no historical connection with the tourist venue and any known facts about the site of the real Clink Prison.

It should also be noted that, as the plaque states, the prison probably occupied several different sites over the centuries. None of the sites on which the prison stood are known for certain.

Above: Clink Street in the 1970s. It could be that the street derived its name from the Clink Prison. Clink Wharf is now in use as the tourist attraction of ‘Clink Prison’ but there is no evidence for this being the site of the original prison.

The phrase ‘In the Clink’ certainly derives from this little prison in Southwark but why this prison should be mentioned in the phrase is a mystery. Clink Prison was quite small and was only used to incarcerated men for their religious beliefs. It was hardly a place of terror. The most notorious prison in London was Newgate Gaol and the phrase for being locked up should have been ‘In the Newgate’.

It may be that the term ‘In the Clink’ was a ‘send up’ of this innocuous prison and that, after the phrase had been often repeated, it eventually passed into colloquial English usage.