Posted on 21 February 2015 by adrianprockter 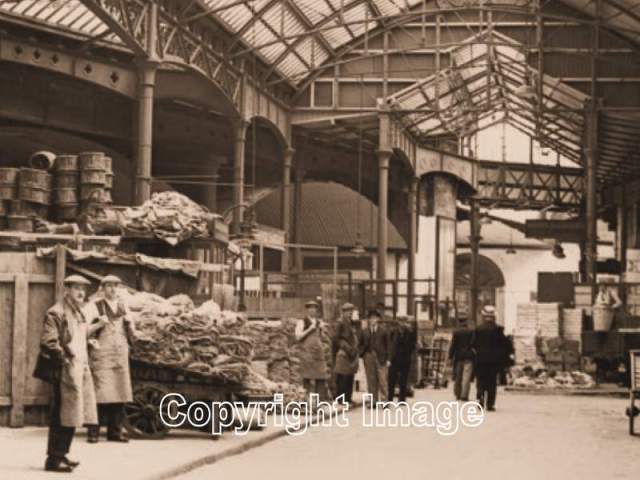 Above: A view inside the market buildings probably in the 1920s. This is one of only a handful of pictures that exist from the early years of the 20th century.

In 2014 the market celebrated an unbroken existence of 1,000 years. Nobody seems to know where the documents are that prove it started in 1014. If they do, it would seem that they are not being disclosed. What we know for sure is that Borough Market was first mentioned in 1276 when it was banned from operating on London Bridge.

It is claimed that, after the first stone London Bridge was completed (being built between 1176 and 1209), a market was opened on the bridge itself. Not being very wide, the market must have obstructed traffic on the bridge and caused quite an inconvenience. When it was banned, in 1276, an order was made for the market be held further south – in Borough High Street. The new location was chosen near the island site, which was partly occupied by the church of St Margaret, surrounded by its churchyard. The island site remains to this day, almost opposite the George Inn.

The City of London received a Royal Charter from Edward VI in 1550 to control all markets in Southwark, which was confirmed by Charles II in 1671. However, the market caused such traffic congestion in Borough High Street that in 1754 it was abolished by an Act of Parliament from operating once more.

The Act allowed for the local parishioners to set up another market on a new site, and in 1756 it began on a 4.5 acre (18,000 m²) site in Rochester Yard, which is on land on the southern side of the church we know as Southwark Cathedral. If we count London Bridge and Borough High Street as early sites, that makes the new site the third throughout the history of the market.

During the 19th century, the market became one of London’s most important food markets, mainly due to its strategic position near the riverside wharves of the Pool of London. The market continued to be busy after the Second World War and on into the 1960s. Gradually, over the next two decades, the market went into decline. Various factors influenced this, not least of which was the increasing use of supermarkets by the general public and therefore the decline of ‘corner shop’ greengrocers.

By the early 1990s, the market was very run down. As one market wholesaler put it ‘this is a horse and cart market’ which is trying to make a living at the end of the 20th century. By that time there were probably no more than six firms trading as fruit and vegetable wholesalers at Borough Market. Much of the property lay empty and was it was a shadow of its former self.

Above: The new extension (towards the left) built from a structure rescued from the old Covent Garden Market.

The present buildings were designed in 1851, with additions in the 1860s and an entrance designed in Art Deco style added on Southwark Street in 1932. A refurbishment of all the buildings began in 2001. In 2004 a South Portico was re-erected by adding part of the Floral Hall, which had previously been part of the Covent Garden buildings. When the Royal Opera House was reconstructed in the 1990s, the western parts of the market buildings were demolished.

The incentive to rejuvenate failing market came in the 1990s when a handful of people started to see the potential for developing it, to take it into the 21st century. The result has been that Borough Market has made a remarkable ‘come-back’. The new plan recognised that a few wholesale fruit and vegetable firms would like to continue operating but they were too few in number to make a viable market by themselves. There was also a growing ‘ground-swell’ of public interest in so-called Farmers’ Markets on the outskirts of London and, with careful management, plenty of space could be found for such a market, with easy access from London Bridge Station and the busy Borough High Street. At first, the Farmers’ Market met on Fridays and Saturdays. That was extended to include Thursdays and by 2015 some of the traders were operating six or even seven days a week.

Above: Fresh produce on display at the Farmer’s Market.

The space above the market was redeveloped to provide space for restaurants and also for offices which, of course, brought in extra revenue. That meant there was revenue from the original wholesalers, the Farmers’ Market, restaurants and offices. The result has been that a viable business plan has been set up which is likely to continue for many years into the future. It is one of the success stories in this part of London.

The history of Borough Market is all bound up with the long and fascinating history of Southwark and Borough High Street. Whatever the exact date was when it started matters little. It has been around for a millennium and, unlike the other Central London markets that are now almost extinct, it would seem all set for many years to come.