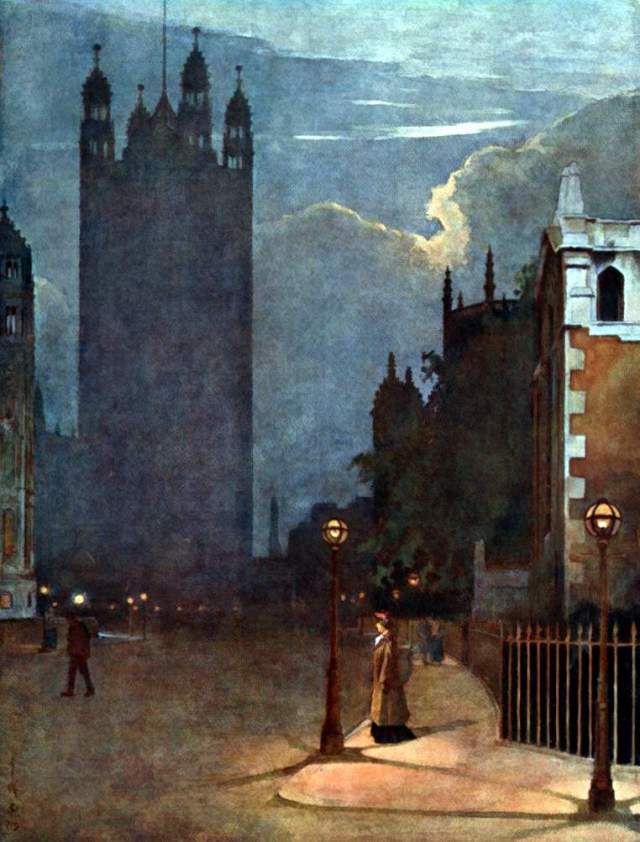 Above: A moonlight night in Westminster, with the Victoria Tower in the background. Standing under a street lamp, a woman watches a man walk away.

The attractive painting is by Yoshio Markino (1869–1956), a Japanese artist and author who spent much of his life in London. Although he was born in Japan and grew up there, as a young man he went to live in San Francisco and in 1897 he travelled to London via New York. He decided to stay in London where he spent much of his life and career (1897–1942) apart from a few trips to the United States.

Markino lived in various parts of London including Greenwich, New Cross, Kensal Rise, Norwood and Brixton. But he found his longest lasting home in the Royal Borough of Kensington and Chelsea.

He was best known for painting scenes showing mist and fog. Many of his paintings were of scenes at dusk or by night for which he had a particular fascination. He made many paintings of the streets of London. The one shown here is typical of his work.

Markino is know to have loved London and it certainly shows in this painting in Westminster. His pictures capture the glamour of what was then the largest city in the world. He saw that glamour even at night, on rain-swept misty streets where solitary figures wandered alone and where people gathered in the cold and sought out warmth and light.

Having spent many evenings trying to capture views of London by night myself, I am full of admiration for his ability to not only capture the mood of a particular place but to do so through the medium of a painting.

4 Responses to Victoria Tower by Moonlight