Posted on 21 September 2015 by adrianprockter 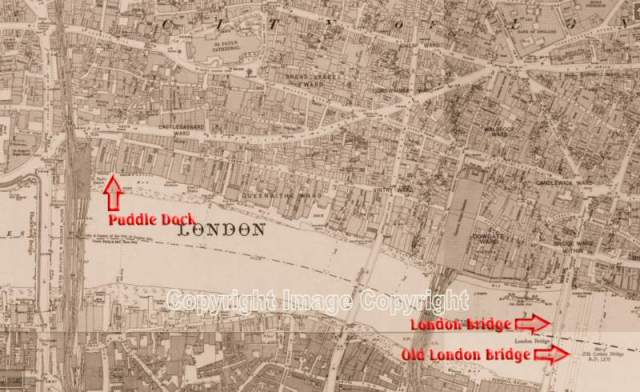 Above: Small version of the Ordnance Survey map for some time around the 1900s.

The Layout of Upper Thames Street over the Centuries

The western end of Upper Thames Street, until Queen Victoria Street was commissioned in 1861, was at Puddle Dock. From that point, the street ran eastwards to join with the old street running north off London Bridge. When London Bridge was re-sited and rebuilt slightly further west, opening in 1831, Upper Thames Street ran under the new northern approach road to the new bridge. It still does today.

Throughout Victorian times and, indeed, until the 1960s Upper Thames street was quite narrow. It was an unattractive street lined with tall brick-built warehouses along its southern and northern side. It has to be said that it had a charm all of its own but the scene between Monday and Friday was a busy one with horse-drawn carts and lorries being endlessly loaded and unloaded with goods to be delivered to or collected from the warehouses beside the street. Over the weekend almost no work was done and it was possible to walk from one end to the other and hardly meet anybody. Not much through-traffic used Upper Thames Street at the weekend either. By the late 1960s and into the 1970s the street was becoming very derelict.

Sometime during the 1970s, nearly all the warehouses between Upper Thames Street and the Thames were torn down. Some of the adjacent land became used for building modern offices. The whole of Upper Thames Street was converted into a dual-carriageway, some of it passing through a specially built concrete tunnel in order to gain land above the tunnel for further large buildings – including a boys’ school with its own swimming pool!

The new alignment and road widening was the death knell of ‘old Upper Thames Street’ and, for those of us who remember how it once was, it becomes harder and harder to relate some of the remaining historic features to the old 1960s narrow street.

Upper Thames Street was, in medieval times and right up to the 1830s, a place where imports from many ports in Europe and the North Sea ports in Russia were landed. The street had interesting connections with several nationalities now remembered mainly by the history of its local churches. Five of them are mentioned below.

In 1370 weavers, brought from Brabant by Edward III, were appointed to meet in the churchyard of St Mary Somerset.

Before the Reformation (1536) seamen who came with cargoes from Bordeaux, landed their wines in the Ward of Vintry. Close by they founded the church of St Martin of Tours for their worship. St Martin was Bishop of Tours and was a well-known saint in France. Sadly, St Martin’s church no longer exists.

In the same way, the Spaniards used the church of St James of Compostela, patron saint of Spain. This church – called St James, Garlickhithe – is also in the Ward of Vintry.

Slightly further north was the church of Holy Trinity the Less which was one of many churches destroyed in the Great Fire (1666). A few years later the site was granted to the Lutheran traders whose centre in the City was the Steelyard, which stood on part of the land now covered by Cannon Street Station.

The church of St Martin Orgar, with a tower that stands in Martin Lane, a turning off the south side of Cannon Street, was handed over to the French Protestants after being destroyed in the Great Fire. That church remained until 1851 when a memorial tower and a parsonage house were erected for the parish of St Clement, Eastcheap – to which St Martin Orgar had been united after the Great Fire.

(The text in the above paragraphs is based on extracts from ‘Down Thames Street’ by Mark Rogers, published in 1921). 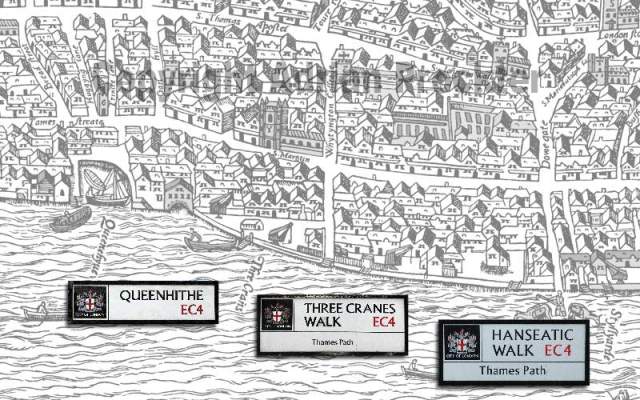 Upper Thames Street appears on any map showing the City of London. Take a look at the Agas map section above. The name of ‘Thames Street’ appears in the street (on the left) and, after nearly 500 years, three street names can be matched to three of the names on the ancient map.

The main places of historic interest in Upper Thames Street are listed from west to east. Each name has its own description under a separate title on this Website.