Posted on 13 November 2015 by adrianprockter

Above: The pub, standing by itself in August 2000.

You don’t have to be a ‘hardened drinker’ to enjoy a good pub. As well as non alcoholic beers there are also soft drinks and even coffee being sold as alternatives. Taking a drink in this pub – whether alcoholic or not – is well worth the visit. Sadly many of the pubs in the City of London with real character are being lost to ‘progress’ as the years roll by. Many of those pubs were not more than 100-150 years old but they had a charm all of their own which a modern pub just cannot match.

The Black Friar pub is so-named because it stands about one hundred yards from the site of a large Dominican Priory which was surrendered at the time of the Dissolution of the Monasteries, in 1536. In that religious house, which was subsequently demolished. Dominican monks wore black so, to the public of the day who did not know about their technical name, they were just called ‘black friars’. 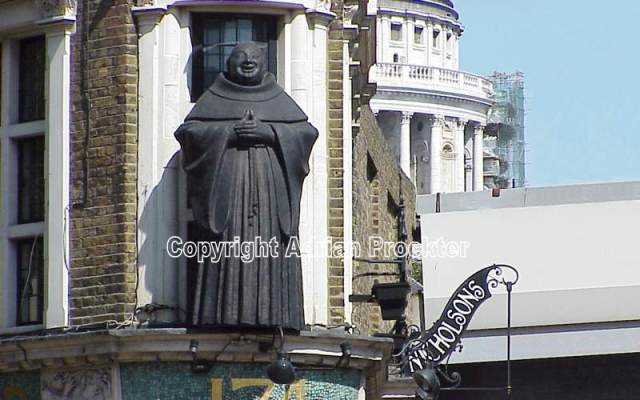 Above: The large figure of a jolly fat monk standing above the entrance.

The name of the pub may go back as far as 1671 when ‘Ye Black Fryer in Black Fryers’ is mentioned. There is a further reference to ‘The Black Friar Playhouse Yard, Blackfriars’ in 1788-92. Today’s pub, with an effigy of the most jolly fat friar you ever did see over the front door, was built in 1875. It stands at 174 Queen Victoria Street — almost opposite Blackfriars Station. The pub is a prime example of Art Nouveau — both on the outside and all over the interior. It would be possible to take 100 photographs of this pub, many of them as close-ups, and still be wondering if your had had missed something. This article makes do with just three pictures. 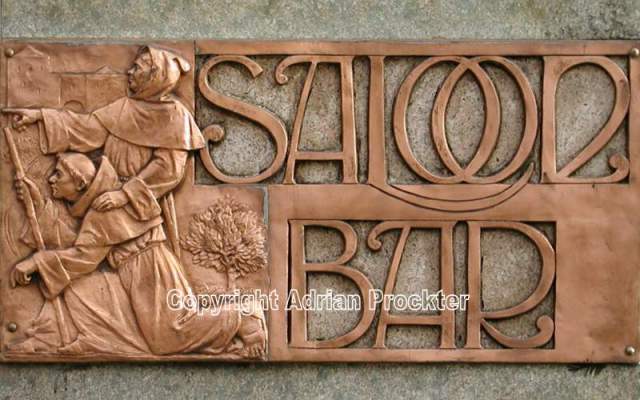 Above: Detail of the Art Nouveau sign on the exterior wall of the pub.

As a photographer in London you quickly learn to take pictures immediately, if they seem to be of interest. You can never go back in time and when the chance to take an interesting picture presents itself you just have to take it there and then. In the case of this pub, new large office blocks were about to be erected nearby and so the views with St Paul’s Cathedral in the background are now impossible.