Posted on 16 November 2015 by adrianprockter

Above: An ‘email stamp’ showing the church towers of St Benet, Paul’s Wharf, (foreground) and St Augustine, Watling Street, with the modern tower block called City Point in the background.

The old days of writing a letter, finding an envelope to put it in and then sticking a stamp on the envelope is now almost a thing of the past — all thanks to the modern technology of email. But what if you had to put an ‘email stamp’ on each email that you wrote? With this idea in mind, a ‘special’ set of stamps has been created for this article (and those that will follow it) on the theme of ‘Wren Spires’. From the visual point of view, choosing the image for a stamp is quite different from deciding on a normal image. The area of a stamp is very small, requiring the image to be more carefully selected. It also means that the person who views it does not have a large image to distract their attention, so they have to focus on the particular very limited subject area. 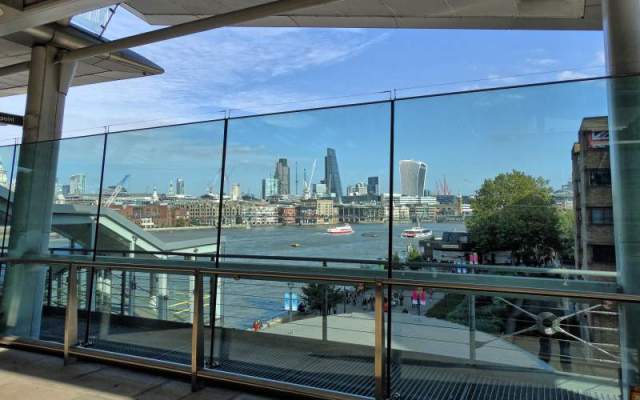 Above: A typical view from the southern end of the southbound platform on Blackfriars Station.

Over the last few years Blackfriars Station has been completely transformed. Until 2009 the station was situated at the north end of Blackfriars Railway Bridge. It was rather shabby-looking, with walls beside the two outer platforms which prevented the passengers from seeing anything outside the station at all. Bearing in mind that the platforms are quite high up, what would have been interesting views over the Thames were blanked off at platform level. In 2009 the station was completely closed to passengers for three years while the whole station was removed and then re-sited on the railway bridge instead of being at the northern end. Being such a long railway bridge, the platforms were able to be made longer but — best of all — the two outer platforms were lined with plate glass walls, affording incredible views towards the east and towards the west. The station has been up and running for about three years now and, as well as it being a more user-friendly station, it provides one of the best viewing galleries over the Thames for looking at City buildings.

Above: Part of a print of 1770 showing some of the spires of the City churches.

So, why was Wren been singled out for attention? When Wren was rebuilding the City churches — after the Great Fire of 1666, which destroyed two thirds of the buildings in the City of London — he decided to move into a house on the riverside in Southwark, about 100 yards east of where Blackfriars Railway Bridge now stands. From his home he could see his magnificent spires rising to grace the skyline as the City was restored. You have probably seen prints of the City made from a similar viewpoint on the Southwark shore. Part of one well-known print is shown here and, due to the houses only being three of four storeys high, the spires clearly stand out above the rooftops.

Standing on the southbound platform of the station, which has fine views facing east, there is plenty to be seen. One feature that strikes the observer is that, even after 300 years, Wren’s wonderful spires on the churches he built after the Great Fire are still able to be glimpsed amid the other City buildings. This article is therefore a tribute to Sir Christopher Wren in the form of ‘email stamps’. There is one at the top of this article and others will follow.

It is now time to turn our attention to the ‘email stamp’ and to look at what it contains. The stamp shows a ‘cluster’ of three buildings that are seen together due to the chosen position of the camera. In the foreground is the tower of St Benet, Paul’s Wharf, with the tower of St Augustine, Watling Street, slightly further away. By walking along one of the extensive platforms it was possible to compose a view with the larger of the two spires against the modern tower block called City Point, which stands near Moorgate underground station. On editing this image for use on the stamp it was interesting also to observe that there were no less than four cranes cluttering the view. These days it is almost impossible to take a picture of the City without some cranes rising up at some point. Parts of the City continue to be rebuilt due to the demand for new office space.

It is rather comforting to see that, after three hundred years of the City developing since Wren was building those churches, the spires that he would had designed to be seen above the rooftops of the houses are still in evidence even today. Not all of them are to be seen as easily as in the 18th century print but at least some of his work is standing proud and saying ‘I am still here’ amid the high-rise offices in today’s City of London.