Posted on 27 June 2016 by adrianprockter 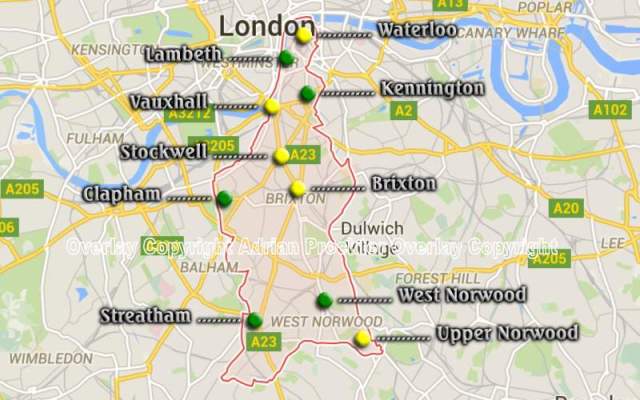 Above: Outline map of the London Borough of Lambeth. GREEN dots show ancient villages – known to be in existence by Saxon or Norman times. YELLOW dots show other early villages which came into being after 1066.

Its now time to take a look at the London Borough of Lambeth. This and Islington are the two London Boroughs to be visited in these articles this summer term. (A small scale map explaining the scheme was posted on 6 April 2016). During the six-year cycle all 12 Inner London Boroughs are ‘visited’ in these blogs and physically visited by the London Group – in our monthly walks. If you wonder whether the order is random or whether there is a method for which boroughs are picked, simple arithmetic explains why at least two boroughs (out of a possible 12) have to be selected in each of the six years. This year Islington has been selected which is a land-locked borough with none of its boundary beside the Thames. It is good to have a look at the places beside the Thames on a regular basis and so Lambeth is selected to ‘pair’ with Islington because Lambeth has a good stretch of riverside to talk about.

If you take a bus ride from somewhere near Waterloo Station and travel south to Upper Norwood your journey will take you through rather uninspiring streets – plenty of them too! You might notice the occasional church and a few open expanses of green grass. However, if you are unfamiliar with this part of London, you will hardly notice that your bus trip takes you through what were once several ancient villages. In Victorian times all the open fields that once clearly separated one village from another were laid out with streets and houses and so one village then became ‘joined up’ with the adjacent ones. Planners use the term ‘urban sprawl’ to describe the resulting scene.

The above map will help ‘get a grip’ of the situation of Lambeth’s original villages. It is probably an over-simplification but at least it will be a start in understanding the early beginnings of this part of London. The map shows five GREEN dots which are the really early settlements. Some were established in Saxon times (let’s say from AD 600 onwards) and others only have documented evidence dating from the time of the Domesday Book (1086). Three of the GREEN dots – Lambeth, Kennington and Clapham – were manors mentioned in the Domesday Book. All the other dots (both green and yellow) were part of the original Manor of Lambeth. The YELLOW dots show villages that came into existence after the time of Domesday and in some cases the villages did not really become established until Victorian times.

The subject of the villages of London is a very large one and those in Lambeth would take a lot or explaining, for which there is not enough space in this article. The object of the map is to give the reader a ‘start on the road’ to discovering which place names relate to the London Borough of Lambeth and to highlight the ancient ones without creating an information overload. 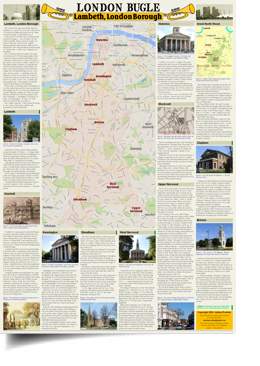 For subscription members there is a large broadsheet (in ‘Bugle’ format) describing the development of the villages in the London Borough of Lambeth in more detail.

If you are not a subscription member you can contact Adrian to obtain the pdf for yourself. The cost is £5.00.

2 Responses to Lambeth, London Borough of