Posted on 15 July 2016 by adrianprockter 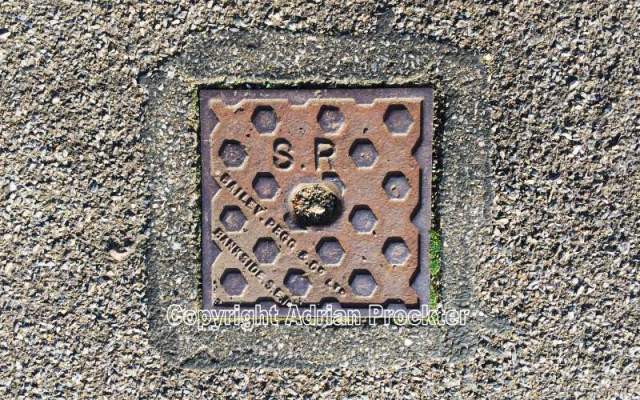 Above: Square metal plate, with a side of about 12 inches, with the location ‘Bankside, SE1’. It would have been manufactured after 1920 because, before that date, it would just have been inscribed ‘Bankside, SE’.

Standing on a station platform waiting for a train that has been delayed can be a frustrating business. I was in that situation a few weeks ago and, along with others, I was pacing up and down the platform while waiting. Why people walk up and down has yet to be explained. It certainly achieves nothing at all. Suddenly as I walked along the tarmac of the platform, I noticed two metal plates on the ground — a square one with a side measuring about 12 inches and a larger rectangular one. There was nothing remarkable in that but, on closer inspection, the street name where they were made was incised into each plate. They had both been made within about half a mile of each other and they had both been made in Southwark.

We are all familiar with steel works being closed on large sites in the north of England and other places. That is where we have come to think of steel being made. As I looked at the words, I began to think of the many man-hole covers and even railway bridges crossing roads that carry the name of the place where they were made. Very often, if they are over 100 years old, they will have been made in London.

In the case of the two pictures, one plate was made on Bankside, a narrow street that runs along the riverside between London Bridge and Blackfriars Bridge; the larger one was made in Union Street, a turning off Borough High Street. Nowadays there are no factories involved in heavy engineering in the Inner London area and there are probably none within the area enclosed by the M25.

Herne Hill Station opened in 1862. How long the plates have been in their present positions is not clear. There is no clue on the larger plate (‘Borough’) as to how old it is. For the smaller plate, that was made around 1920 or later because the area code ‘SE’ was not numbered — like SE1, SE2, SE3, etc — until 1917 when the new system was devised.

In Victorian times nearly all the street furniture — railway bridges crossing roads, lamp-posts, bollards, man-hole covers and even doorbell mountings — were made in London. Many are still in use today, just a mile or two from the original foundry, just like the two metal plates in the photographs. Chances are that, if you want a similar item today, you will have to send off to Central Europe or the Far East to have it manufactured.

As I filled in the time while waiting for my train — by photographing the two objects in case I forgot about them next time was I on the platform — I thought that there was a certain charm about seeing a humble object bearing the name of a foundry local to where it was situated. It exhibited the confidence that the Victorians had in being able to make almost anything right here in London — and right in the centre of the capital.