Posted on 20 February 2017 by adrianprockter

Above: The present parish church of St Mary seen from the west side of Marylebone Lane. The church is unusual in having a round apse (seen on the left in this view).

The title for this blog probably should have been ‘The Two St Mary Churches at St Marylebone’ because, over the centuries, there have been two churches, each occupying two different sites but both of them very close to each other. The village of St Marylebone owes its origins to an earlier site near the western end of Oxford Street. In those early days the village was called Tyburn because it was near the stream by that name. Due to the community being very close to the site of public executions at Tyburn Gallows, the villagers decided to move further north and they settled near Tyburn Manor House – which stood at the northern end of today’s Marylebone High Street.

In 1440 a licence was granted to move the church about a quarter of a mile (0.4 km) north of the ancient church of St John the Evangelist – which was the name of the church in the village of Tyburn. A new church was erected on a site on the west side of today’s Marylebone High Street, almost opposite the manor house. The old church of St John had been on the east bank of the River Tyburn and the new church was also built on the east side of the same stream. It was at this time that a change in dedication was made – calling it ‘St Mary’. That led to the name ‘St Mary le Bourne’, meaning ‘St Mary beside the stream’, from which the place-name ‘Marylebone’ derives. 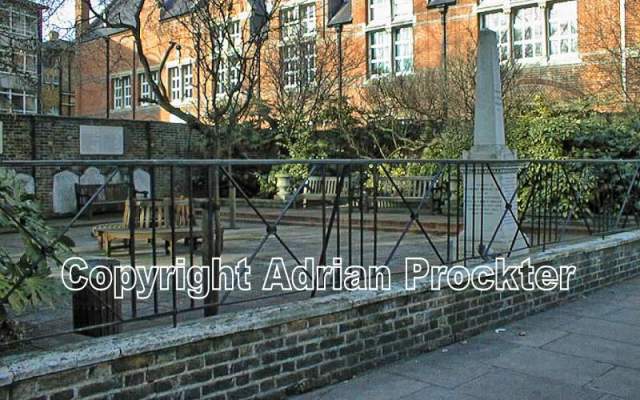 Above: View from Marylebone Lane of the gardens now laid out on the site of the old church that was bombed.

Sadly the church was badly damaged during the Second World War. What remained of the 1740 building was demolished in 1949 and the site was laid out as a garden. The sunken part of the gardens marks the outline of the foundations of the walls of the church, beside the west side of Marylebone High Street.

The old church was quite small and by the start of the 19th century the need for a new, larger parish church had become necessary since the population of the parish had grown from 5,000 in 1740 to almost 64,000 by 1801. A new church was built 1813-17 on speculation as a chapel of ease, designed by Thomas Hardwick. The vestry decided to make it the parish church and demote the old church of St Mary to chapel status. Over the door which is under the portico, can be seen an inscription stating that the church was consecrated on 4 February 1817. It was built on the south side of the New Road (this part being called Marylebone Road).

In 1846 Robert Browning and Elizabeth Barrett were married at the church. In 1887 the first ever performance of John Stainer’s ‘Crucifixion’ took place in the church.