Posted on 15 March 2017 by adrianprockter 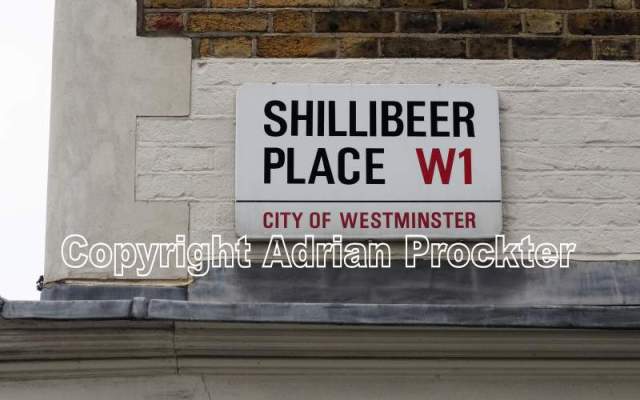 Above: The street name is the only reminder in London of George Shillibeer.

George Shillibeer was born in St Marylebone and christened in St Mary’s church, St Marylebone, on 22 October 1797. He worked for the coach company Hatchetts, in Long Acre which was the centre for coach-building in London.

In the 1820s Shillibeer was offered work in Paris, France, where he was commissioned to build a much larger horse-drawn vehicle than a normal stage coach. He was asked to build a coach capable of transporting over 20 people within the vehicle. His design was very stable and was introduced on the streets of Paris in 1827.

Once back in London Shillibeer was commissioned to build a vehicle, similar to the one in France, for the Newington Academy for Girls, a Quaker school in Stoke Newington which had a total of 25 seats. It is now regarded as the first school bus.

Shillibeer took over premises in Bury Street, Bloomsbury, where he intended to build a new vehicle called an ‘omnibus’ although many people at the time called them ‘Shillibeers’ and later they were called ‘buses’ – which how we have the word today. These vehicles were for fare-paying public with multiple stops. His first London ‘Omnibus took up service on 4 July 1829 on the route between Paddington and the Bank of England via the New Road. The Paddington terminus was a pub known as the Yorkshire Stingo which stood on the south side of what is now Marylebone Road, towards the western end. From there it travelled along the New Road – now called Marylebone Road and Euston Road – to Somers Town. The last part of the route was via City Road and Moorgate to the Bank of England. 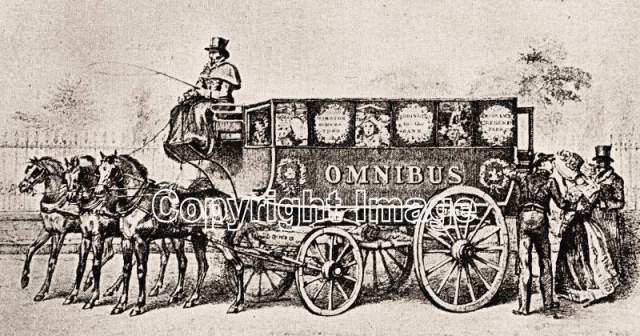 Four services were provided in each direction daily. This service was described in the first advertisements as being ‘upon the Parisian mode’ and that ‘a person of great respectability attended his vehicle as Conductor’. An account of the new service was given in the Morning Post for 7 July 1829 stating: ‘Saturday the new vehicle, called the Omnibus, commenced running from Paddington to the City, and excited considerable notice, both from the novel form of the carriage, and the elegance with which it is fitted out. It is capable of accommodating 16 or 18 persons, all inside, and we apprehend it would be almost impossible to make it overturn, owing to the great width of the carriage. It was drawn by three beautiful bays abreast, after the French fashion. The Omnibus is a handsome machine, in the shape of a van. The width the horses occupy will render the vehicle rather inconvenient to be turned or driven through some of the streets of London.

Shillibeer’s main problem was that Hackney Carriages had an exclusive monopoly on licensing in Central London, forcing him to run his route outside the area of jurisdiction – which is why he chose the route from Paddington via New Road to Islington and via City Road to the Bank of England. The fare was one shilling which was a large amount of money in 1829. His second problem was that competition was close on his heels – mainly from passenger vehicles carrying 15 people, which attracted less vehicle tax. The competition soon led him to bankruptcy, although he somehow managed to remain operational.

The hackney carriage monopoly ended in 1832 and Shillibeer ran a service to Greenwich in addition to his existing London to Brighton service. His problems soon mounted up, not only was there competition from many omnibus rivals but also from steam riverboat operators and the new London and Greenwich Railway. Shillbeer’s omnibuses really too large for London’s narrow streets. He was also in default of his road taxes but this time his property was seized and he absconded to Boulogne with angry creditors chasing him. On his return he was sentenced by the debtors’ court to several months in the Fleet prison. Soon after his release the authorities discovered 130 gallons of smuggled French brandy in his premises in Camden and he was returned back prison.

Shillibeer spent the rest of his career as an undertaker. He invented an undertaker’s vehicle which combined a hearse and mourning coach into one vehicle – called the ‘Funeral Omnibus’. It was modelled on a French design.

George Shillibeer died at Brighton, East Sussex on 21 August 1866 but he was buried in the churchyard of a parish church at Chigwell, in Essex. The only reminder of George Shillibeer in London is Shillibeer Place in Marylebone, near where he had his depot and stables. It is only a narrow side turning that runs north off York Street, at its western end.