Posted on 30 June 2017 by adrianprockter 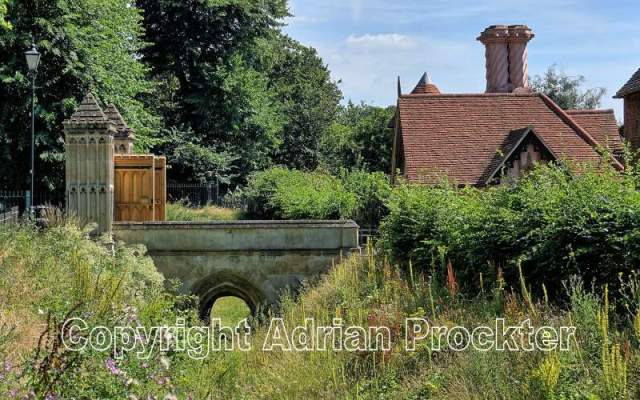 Above: Looking along the line of the moat (which was excavated in 2011) with wild flowers and grasses now growing on the banks this year (in 2017). The stone moat bridge leading to Fulham Palace can also be seen. Note: A Victorian print of it from a similar location is to be seen further down this article.

As has already been mentioned in the blog about Fulham Palace, the property was surrounded by a moat. The first known reference to it dates back to 1392 when it was described as a ‘magna fossa’ (or great ditch). Some historians believe it may date back to the Iron Age. Sadly, between 1921 and 1924, the moat was filled in and almost no evidence for it remained visible after that time. Its line could be seen but only by knowing where the water had once been. One point remained where evidence for the moat could be deduced and that was the location under the moat bridge at the main gateway into the grounds of the Palace. Even there, the moat was not obvious. The moat had been filled in with builders’ rubble by Fulham Council at the request of the Bishop of London, a move that led to a public outcry with the issue even being raised in the Houses of Parliament.

In 2011 excavations were started to dig out the rubble and re-establish the banks of about 90 metres of the moat ditch in a section running SW from the moat bridge. The work was part of an £8million improvement programme to the palace and the adjoining Bishops Park. Archaeological consultant Phil Emery led the project on behalf of Hammersmith and Fulham Council who were keen to preserve the moat for future generations.

During the dig, the moat was found to be filled in with items such as glass and stoneware bottles, china, teapots, porcelain dolls. Even a perfectly preserved ‘Lipton Tea’ enamel sign was unearthed during the renovation work.

The entire moat is preserved below ground as an unbroken circuit and, as such, it is probably unique in London. It is known to be the longest domestic moat in England – an earthwork enclosing an area of 14.5 hectares (35.8 acres) with the original water extending for about one mile in length. The Tower of London had a moat whose area is now grassed over. It surrounds the outer walls of the building but is never encompassed such a large area of land as at Fulham. There is an actual moat remaining from before Tudor times at Eltham Palace which, again encloses less land than Fulham Palace.

The moat bridge to Fulham Palace and the attached gate piers remain from much earlier times and are now Grade II listed. Excavations in the moat revealed the remarkably well-preserved remains of a medieval timber bridge. The timbers were dated to about 1249-85 – a precursor of the extant stone structure and pre-dating the earliest documentary evidence of the moat. Restoration of this prominent section of the moat at the main entrance to the palace and the associated interpretation, are helping to promote the appreciation and long-term preservation of this historic site.

Above: A similar view of the bridge stone and moat with water in it, taken from a Victorian book published about 1880.

It is an obvious statement to make but, for a moat to work, the land it surrounds must be completely level. At Fulham Palace, the moat was a mile in length which means that the large piece of land it surrounded had to be level across all the land. The average rise and fall of the Thames is about 15 feet which means that the water level on the river fell further than it did in the ditch that formed the moat. The moat would have been topped-up with a high tide but, when there was a low tide, the water level on the river would have been below the bottom of the moat.

When the moat contained water, the level was controlled using a sluice-gate from the Thames. Most of the mechanism has been found in situ and it is hoped to put that on public display. The sluice gate is near the Thames – only a short distance from the moat bridge and gatehouse to the Palace grounds. Little is known about the reasons for constructing the moat in the first place. Over the years many theories have been put forward. It is believed that the land on which the palace stood might have been a tiny natural island surrounded by very small tributaries of the River Thames. Why it was felt necessary to spend so much effort constructing such a large moat when the building it surrounded was not a castle or place of fortification may never be known.