Posted on 25 August 2017 by adrianprockter 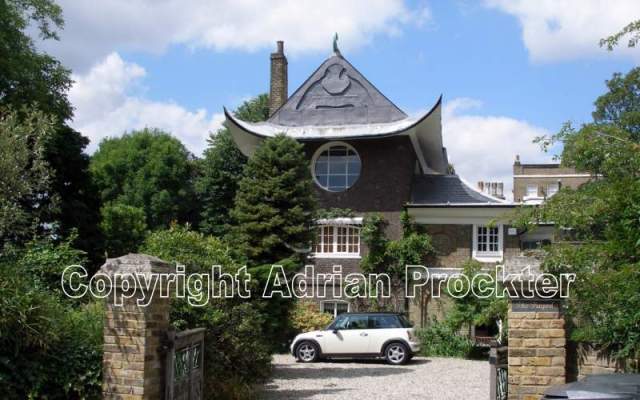 Above: View of the house from Pagoda Gardens.

One of Blackheath’s more unusual houses is a house built in the form of a Chinese Pagoda near the heath. It is actually within the London Borough of Lewisham. It was built about 1760 as the summer house for the fourth Earl of Cardigan and his family who lived in Montague House, which stood near the site of today’s Ranger’s House. The grounds, although some distance away, were originally gardens, stables and orchards for Montagu House.

The Pagoda would have been built at the same time as William Chambers’ quite different Chinese work at Kew. Chambers wrote a book about Chinese buildings which was a best-seller.

According to Bridget Cherry – in the Pevsner series of volumes on London – it is possible that the house was not built until the 1780s when the residence was lived in by the Duke of Buccleuch. The thistle motif on the gable could be associated with him.

About 1798 Princess Caroline of Brunswick, the estranged wife of George IV, put the building to a practical use by using it as a nursery school. She had left the king without being able to take her baby daughter Charlotte with her since the king had insisted that the daughter should remain with him. Caroline brought up several orphans at the house. There were rumours that at least one child was her own, by a secret lover, but the parentage was never established.

By the 1950s the house was being used as a children’s home. In the late 1980s, the house was in use as a temporary home for Tamil refugees. Lewisham Council inherited the house in 1990 when the ILEA was abolished and about 1992 it was bought by a private owner for use as a residence. The Chinese style building stands in a road called Pagoda Gardens. Although its location is generally referred to as the area of Blackheath, it is within the London Borough of Lewisham.