Posted on 8 June 2018 by adrianprockter 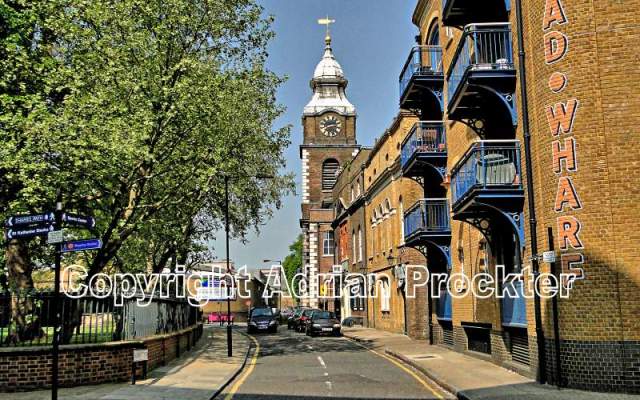 Above: Looking north along Scandrett Street from the junction with Wapping High Street at the elegant church tower. The old churchyard is on the left.

A separate parish was created at Wapping in1694 – from part of St Dunstan, Stepney – and St John’s provided all the religious services for the village. The church was built in 1790 to designs of Joel Johnson. The church, with its fine tower, stood in Scandrett Street which runs north from Wapping High Street.

During the Second World War the church was destroyed in the bombing, leaving only the church tower standing. The tower, with gold-faced numerals on the clock, stands beside the ruins of the church on the east side of Scandrett Street. Because the clock is still working, it is likely that people living in Rotherhithe, who can easily see the clock on the tower across the Thames, probably think that there is also a church beside it. Sadly, that is not the case. The church was never rebuilt.

The old churchyard lies on the west side of Scandrett Street, at the junction of Wapping High Street. It is quite extensive and is partly surrounded by a wall a partly by elegant iron railings, Being open for public access, it is now a place of peace and tranquillity in a rather built-up part of the London Borough of Tower Hamlets.