Posted on 22 October 2018 by adrianprockter 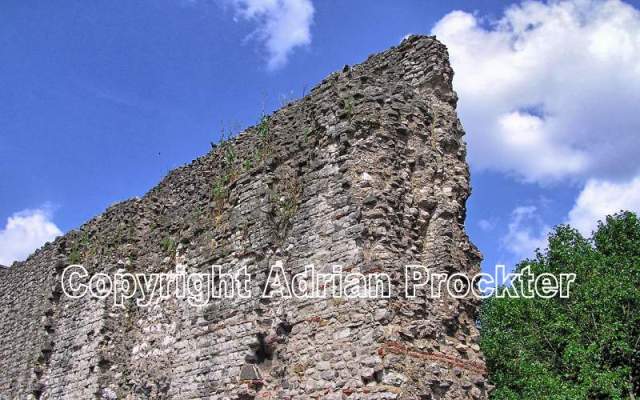 Above: One of the most impressive remaining sections of the Roman Wall stands near the entrance to Tower Hill Underground Station.

The Romans established Londinium – which eventually became the modern City of London – in AD 43. The settlement grew up around a bridge that stood where the medieval bridge (the one with the houses on it) was built. The town continued for over 140 years before it was considered necessary to construct a wall around it. Exactly what caused the Roman authorities to build the wall is not known but it was an impressive feat of engineering. There is no natural stone in the London area. The ground in London consists mainly of layers of clay. All the stone for the Roman Wall (also called the London Wall) had to be obtained from quarries near Maidstone, in Kent. They happen to be near the River Medway so the stone – called Kentish ragstone – was loaded into boats which were sailed along it to the mouth where it meets with the River Thames. The stone was then sailed up the Thames and delivered to the riverside at Londinium.

The wall was constructed with entrance gates at strategic points – mainly where Roman roads converged on Londinium. The wall was about two miles (3.2 km) long enclosing an area of about 330 acres (130 ha). It was approximately 2.5 m (8 feet 2 inches) to 3 m (9.8 feet) wide and up to 6 m (20 feet)) high. It is estimated that the enormous task was undertaken between AD 189 and AD 197, providing a wall around the landward side of the township as well as a river defence containing water-gates.

Cutting a long story short, the Roman Wall remained standing until 1760 when the authorities decided that the wall was hindering the expansion of the City. The gates were removed and permission was given for anyone who so desired to demolish the wall. Until that date, it was illegal to even remove any stone from the wall, let alone to demolish it. The result was that much of the wall was taken down and the stone was put to good use in building other structures.

Only a few short sections of the wall remain to be seen today. Many of those sections only remained because they formed party-walls to buildings that were constructed either side of it, to save building another wall. Due to bombing during the Second World War (1939-45) many buildings in the City was destroyed and sections of the Roman Wall – being too massive to be demolished by the bombs – were laid bare.

One such section stands outside the entrance to Tower Hill Underground Station. For many years after the War, the ruins of modern walls beside it were to be seen – still built onto the Roman Wall. With time, the modern ruins were removed and the wall was set into gardens to be seen and admired by the many people who use the underground station and who visit the Tower of London. There are only a few pieces of the Roman Wall remaining to be seen full-height and this is one of them.

The line of the original Roman Wall around Londinium is covered in a separate article which shows its position on a modern-day map.