Posted on 23 November 2018 by adrianprockter 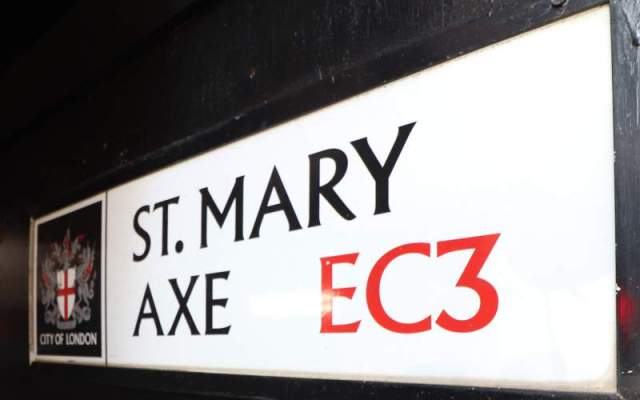 Above: The current street nameplate.

Features of the Street

We will start with the street. The street is so-named because it took its name from the church. This is not the only street in the City of London to adopt this approach. A short distance to the south is a street simply called ‘St Mary at Hill’ (without the word ‘Street’ on the end of it) and that derived its name from the church which is still standing beside it, also called ‘St Mary at Hill’. There are other streets in the City with a similar background.

Above: Part of the Copper Engraving, showing the street called Bishopsgate (far left) and the narrower street called St Mary Axe (towards the right). The church tower of St Mary Axe is coloured along with the little churchyard.

History of the Church

We now consider St Mary Axe (Church). There were over a dozen medieval churches in the City all called ’St Mary’ which meant that they all acquired additional names to clarify which one was being described. This one had the strange addition of ‘Axe’ in its name. At this point, things become rather strange. The name came from the full title of the church which was ‘St Mary, St Ursula and her Eleven Thousand Virgins’. The name related to a legend that Saint Ursula, when returning to Britain from a pilgrimage to Rome, accompanied by eleven thousand handmaidens, had refused to marry a Hunnish chief. She was executed along with her whole entourage by an axe on the site of modern Cologne, in about AD 451. A 16th-century document claimed that the church in the City possessed one of the axes used in the massacre.

It is more likely, however, that the church derived its name from a nearby tavern which prominently displayed the sign of an axe. Inns and taverns by the name of ‘The Axe’ are not unknown in London. Where Newcomen Street joins onto Borough High Street used to be an inn called the ‘Axe and Bottle’ which was taken down when Newcomen Street was laid out. There is also a building in Hackney Road, no longer in use a pub, that was called ‘Ye Olde Axe’ and still bears a representation of an axe worked into the brickwork.

Another likely source of the ‘Axe’ name may have come from the axes used by the Worshipful Company of Skinners, who were patrons of the church. The sign of an axe is believed to have been displayed on the exterior of the church at the east end.

Whatever the reason why the curious name of ‘Axe’ came to be associated with the church, that name stuck and it passed to the name of the street. The church stood near the top end of the street, on the west side, in the Ward of Lime Street. A few detailed facts about the church will now be provided.

(1) The first recorded mention of the church was in the year 1231. The parish united with St Andrew Undershaft in 1565 due to the church being in disrepair and no services being held. [‘Dictionary of London’ by Henry Harben]

(2) It is shown on one plate of the Copper Engraving which dates from the 1550s. It had belonged to the Priory of St Helen. The church and its churchyard are shown on the west side of St Mary Axe (Street) towards the north end.

(3) In 1562 the church was given to the Spanish Protestant refugees for their divine worship. [‘London Past and Present’ by Henry Wheatley]

(4) In 1860 the site was in use by the ‘Lime Street and Cornhill Wards School’. That is shown on the 1895 Ordnance Survey map which shows the words ‘St Mary Axe Church’ in Gothic script, the usual way that is used on OS maps to indicate ancient sites.

(5) The site of the church at 37, 43 and 45 St Mary Axe (street-numbers used in 1918) was observed during redevelopment in 1950-51. Disturbed medieval burials were observed on the sites of 43 and 45 St Mary Axe, which were the southern part of the site. This confirms that the site consisted of a church with a churchyard on the south side. [‘Saxon and Medieval Parish Churches’ document by John Schofield, an archaeologist at the Museum of London from 1974 to 2008]

All these highly respected historical sources make it perfectly clear that the site of the church was on the west side of the street and towards the northern end. Henry Harben agrees. Henry Wheatley agrees. Even the Ordnance Survey maps agree.

Above: City Plaque which has been placed in the wrong position in the street.

Now for the Problem

So what is the problem? A few years ago a City Plaque was placed on Fitzwilliam House, which is an office block on the east side of St Mary Axe (Street), towards the southern end. The plaque states that it marks the site of the original church. From what has just be set out this is not possible.

Unfortunately, the world we live in today is dominated by the Internet. If an erroneous article appears on the Internet, it is not long before someone else (falling to do any proper research for themselves) ‘cuts and pastes’ the error into their own Webpage and so the ‘fake history’ starts to multiply and gradually become a ‘fact’. It also shows that you should not believe the text on every City Plaque that you come across. The person responsible for carrying out the research for the site of this plaque, probably just looked at several Websites which all say that the church stood on the EAST side at the SOUTHERN end. If they had taken the trouble to look at original sources, they would have found that the church stood on the WEST side towards the NORTHERN end. It is a shame that the originators of text on the Internet do not consult original books and maps any more – preferring to take the easy option of cribbing off text already on various Websites.

Well, this article is also on a Website. Yes, it is – but it has been written after consulting the original text from printed books and maps to be found in any good reference library. None of the text was copied from information on recent Websites. Unfortunately, you cannot believe everything you read on the Internet. Well, there’s a surprise!

Not only is the shiny City Plaque in St Mary Axe (Street) in the wrong place but there are at least two other City Plaques that are also incorrectly positioned. Does anybody care whether the history of the City is correctly explained to the passer-by?