Posted on 21 December 2018 by adrianprockter 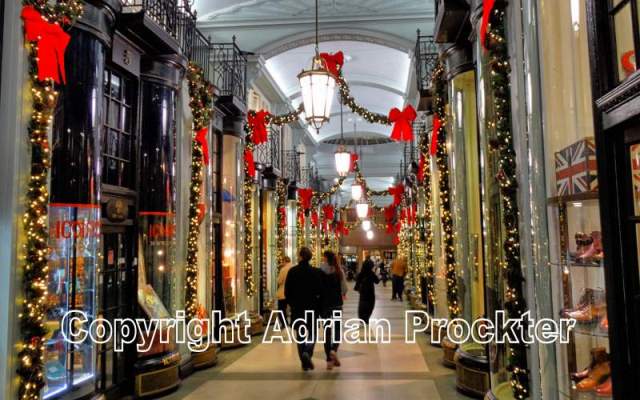 Nothing stays the same. That’s for sure. Because the date of Christmas is a fixture, when that time of the year comes around it is a reminder of times past that we remember – probably because the festival triggers a memory from the past, even back to our childhood.

If you want to see London at its most festive, take a trip to Piccadilly Circus just a few days before Christmas and walk down the street called Piccadilly. The shops will all be decorated for the lead up to Christmas. Hatchard’s, at 187 Piccadilly, established in 1797, with it’s ‘By Appointment’ signs proudly hanging outside, has a distinctive look. Things have changed in Piccadilly. Not far away used to be Simpsons, 203-206 Piccadilly, which always put on a splendid show with its large displays behind the curved, non-reflective windows. The shop closed in the 1990s and the premises were sold to the Waterstone’s chain of bookshops in 1999.

Further west, on the south side of Piccadilly, is the Piccadilly Arcade. It is one of the few arcades remaining in the West End. Nearby is the church of St James, Piccadilly, and on its southern side is the attractive Jermyn Street which is always decorated for Christmas. If you get that far, don’t forget to look at the windows of Paxton and Whitfield, with their amazing display of cheeses, or to look at Floris with their expensive perfumes. Jacksons was another shop in Piccadilly that is no more. It was a typically Victorian grocer’s shop, with enticing crystallised fruits on display in its windows. Another ‘must’ is to gaze into the windows of Fortnum and Mason. Once you have seen them all, enter through the Piccadilly main entrance into the food hall. Buy something if you like but if you only stand a do some ‘people watching’ it will provide plenty of entertainment. Can you resist buying a Stilton cheese in a glazed pot? Perhaps go up to for tea and cakes in the restaurant.

Once you have walked some distance along Piccadilly, cross the road and double-back to look into the Burlington Arcade and walk to the northern end. Turn left into Burlington Gardens and then right into New Bond Street. Around you are not your average shops but, if you go at this time of the year, the whole street will be busy with up-market shoppers arrogantly parking their up-market cars on double yellow lines to dash into a jewellers or handbag shop.

Its a bit of a walk but well worth the effort to continue north up to Oxford Street. If you have the energy, head over to Selfridges store and look at their windows before trekking around inside. Another suggestion is to walk east in Oxford Street to Oxford Circus – and then enjoy the decorations above the roadway. If the walk has not tired you out already, Carnaby Street is not far away. To reach it, take a turning on the east side of Regent Street, which will bring you to Kingly Street. Carnaby runs parallel to Kingly Street on the eastern side.

Finally, if you are not shattered by all the walking, return to Regent Street and take a bus to Trafalgar Square in time for the carols around the Norwegian Christmas tree which start early in the evening. For refreshment, you are spoilt for choice, there are restaurants and cafes all around you. There is really nothing like seeing the rush of people in London’s West End just before Christmas. It is all the more satisfying if you are walking around having already done all your Christmas shopping.

2 Responses to Christmas in London