Posted on 6 September 2019 by adrianprockter 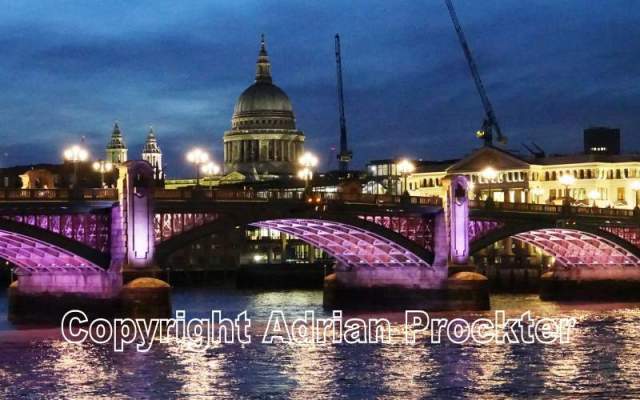 Extending along the length of the Thames where bridges cross the river in Inner London, the footpaths and roads alongside were once mainly dark areas – lit only by any available street lighting. There was a certain romance to the experience because, being in a relatively dark area, the eye got used to the gloom and looked out to any lighting reflecting on the waters of the Thames. Many of the large buildings beside the Thames are also floodlit which adds to the ambient light.

Bridges like Tower Bridge, London Bridge and Westminster Bridge have carried lighting for many years. Of recent times, Tower Bridge has had new lighting installed – using modern Light Emitting Diode (LED) lamps which have allowed multi-colour illumination. The Golden Jubilee Bridges have been illuminated since they were first opened. Further upriver, the Albert Bridge is usually floodlit. The other road bridges have mainly remained without any floodlighting – apart from street lights illuminating the roadway. The only other lighting on road bridges or railway bridges has been any legally required safety lights mounted for the benefit of vessels travelling on the river.

People love to walk beside the river – whether it is the pavement beside a road or on a footpath. Of recent years, many of the old warehouses have been demolished and new footpaths have been created allowing even greater access to paths beside the Thames. On a warm summer night, thousands of people walk beside the river, either to enjoy a good stroll or to walk to a riverside pub and enjoy a drink. These facts have not been lost on several authorities who are in the process of making a riverside walk a truly amazing experience.

Over the past year, the first stage of a new project has been completed. Eventually, 15 bridges (both road bridges and railway bridges) will be illuminated, making the whole scheme one of the longest public art commissions in the world. The first bridges to have the new lighting installed are London Bridge, Cannon Street Railway Bridge, Southwark Bridge and the Millennium Bridge. The lighting is by LED with the lamps being mainly concealed and only the colours from them visible on the sides of the bridges. In the case of arches – like those on Southwark Bridge – the under-side is illuminated, with some of those lamps being unavoidably visible. Care has been taken to make sure that any visible lamps do not shine out so that they create a glare in the eye of the observer.

The project is being privately funded with the only public money to be spent being £250,000 of ‘seed funding’ from City Hall for the initial competition. The City of London Corporation has also paid to replace the light fittings on London Bridge so as to ‘blend in’ with the new LED illumination. It is proposed that the lighting remains for at least 10 years. When complete, the project called ‘Illuminated River’ will extend a total of 4.5 nautical miles (8.3 km) along the Thames.

The new lighting is designed to co-ordinate London’s bridges, with old lights replaced with new LEDs that will switch off at 02:00 BST in order to reduce energy consumption. The Illuminated River Foundation charity has raised funds to install and maintain the lighting. The design was created by the American light artist Leo Villareal and British architects Lifschutz Davidson Sandilands. The colours of the lighting were influenced by the palettes of Impressionist and English Romantic painters.

The first four bridges had their lighting switched on in summer 2019 and the work is hoped to be completed by autumn 2020. At an average cost of £3 million per bridge, Illuminated River is not cheap. Organisations including the Rothschild Foundation, the Blavatnik Family Foundation and Arcadia have already made considerable donations. Hannah Rothschild, who was behind the idea, said the project ‘will transform a snake of darkness into a ribbon of light’.

For those who enjoy walking beside the Thames at dusk or at night, the completion of the project cannot come soon enough. The whole concept is really splendid. Capital cities like Paris already illuminate their bridges and have done so for many years. It is to be hoped that, once the project has been completed, funds will be found to keep this innovative idea going for many years to come.