Posted on 27 September 2019 by adrianprockter 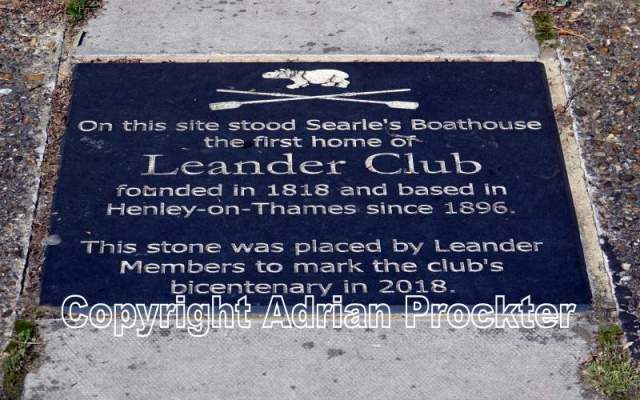 Above: Plaque on the Albert Embankment marking the site of Searle’s Boatyard. On these premises, the Leander Club was founded.

This may well be a name you have not heard of. It relates to the shore at Lambeth before the Albert Embankment was constructed in the 1860s. Most of the riverside through Central London is now embanked – that is to say that there is a sturdy brick, stone or concrete wall keeping the river back from the land causing the Thames to be at a higher level than when there was the original shore. Most of the embankment work was carried out in Victorian times. Before that, the shore was just a reed-bed with numerous slip-ways used for launching vessels as well as even more ship-ways where vessels were built or repaired. It must have all looked rather ‘untidy’ but, at the same time, far more interesting than today’s boring embankment walls.

The way of life just described applied especially to the river banks at what is now called South Bank (where the Royal Festival Hall and the London Eye are now situated). The busy foreshore was also to be seen upriver of Westminster Bridge (now principally the sites of St Thomas’s Hospital and Lambeth Palace). Just upriver of Westminster Bridge, on the Lambeth shore, were several large boat-houses which maintained and also repaired the impressive State Barges that were used by the royalty on State Occasions when important events took place on the Thames. In addition, Ceremonial Barges for most of the Companies of the City (like the Fishmongers, the Stationers or the Goldsmiths) were to be seen on the river. Their own highly ornate barges made an appearance on such occasions as the Lord Mayor’s Show. The famous painter, Canaletto, painted the scene when he was in London. It is one of his most famous works. During the Lord Mayor’s Show these days, the Lord Mayor travels by road to the Law Courts which are now situated in the Strand. In earlier times, particularly during the 18th century, the Lord Mayor travelled by coach to the Thames in the City where he boarded a Ceremonial Barge and was conveyed by water to the Law Courts which were previously beside the Houses of Parliament, at Westminster.

Above: The scene on the riverbank at Lambeth in 1830. This is Searle’s Boatyard with a long state barge under repair in the shed.

The shore at Lambeth was an important location, with craftsmen on hand to renovate the large ornate barges that were rowed by a team of skilled oarsmen. Repairs were constantly needed for these important vessels. In addition, intricate carving had to be maintained and often gilded. One such location was Searle’s Boatyard – probably the most well-known of all the boat-yards on the Thames shore. Searle’s Boatyard was originally situated on the shore just above Westminster Bridge, on the Lambeth side of the Thames. In its later years, it was described as being ‘off Stangate in Lambeth’ which was a site near Lambeth Bridge. Since the removal of all crafts on the river bank and the construction of the Albert Embankment, few people have ever heard of Searle’s Boatyard and certainly would not be able to tell you where it was situated. The family boat- and barge-building concern of George Searle, at Lambeth, was in existence from about 1763 until the late 1820s. A ‘Mr Searle’ is known to have bought the old Skinners’ Company barge as late as 1858 and converted it for Queen’s College, Oxford, to be used as a houseboat.

It was at Searle’s Boatyard that the Leander Club – one of the oldest rowing clubs in the world – was founded in 1818. It was an obvious place to found such a club. Only three other surviving clubs were founded prior to Leander – Brasenose College Boat Club and Jesus College Boat Club (the two competing in a Head race in 1815) and Westminster School Boat Club, founded in 1813. The Leander Club is now based in Remenham, in Berkshire, and adjoins Henley-on-Thames.

Leander’s founders were at Searle’s Boatyard, in Lambeth, between at least 1818 and 1860. The club moved between two or three sites on the Lambeth shore during those years. In 1860, the club moved its boats to a tent in Putney – pitched on the site of the current London Rowing Club. Leander’s rented rooms at the nearby Star and Garter pub which is still near the river at Putney. In 1866, Leander’s built a proper boathouse on adjoining land and had varying degrees of commitment to this property until 1961. The site is now occupied by Kings College School, Wimbledon. In 1897 Leander’s moved to Henley where it built the current clubhouse.