Posted on 11 July 2016 by adrianprockter 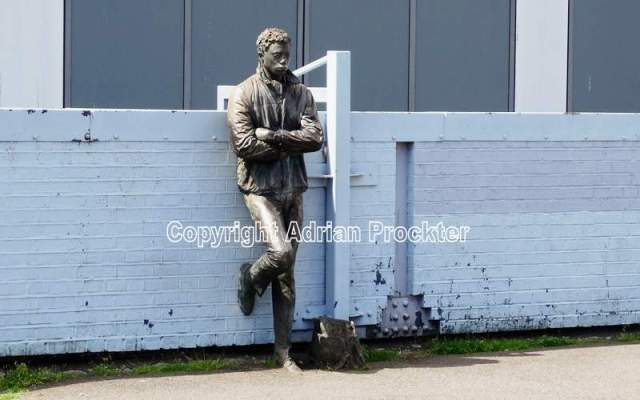 Above: Figure on the Victoria-bound platform.

Three figures have been seen waiting on the platforms of Brixton Station since 1986 and they are still waiting patiently to this day. The realistic figures, of course, are sculptures forming an original installation of art called ‘Platform Pieces’. The sculptures were made by Kevin Atherton (1959- ). They were unveiled on 30 June 1986 by Sir Hugh Casson as part of a £1m renovation of the station – a collaboration between British Rail, the London Borough of Lambeth and the Department of the Environment. 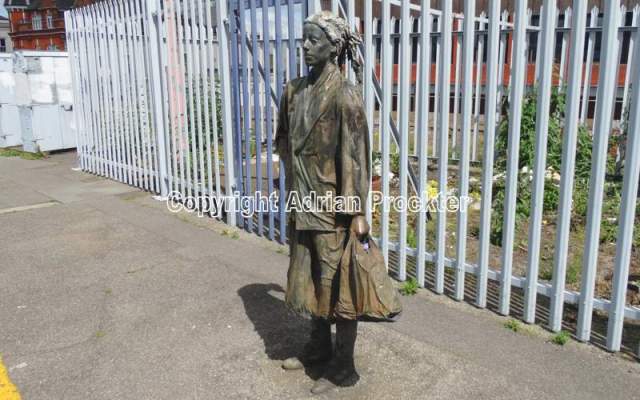 Above: Figure on the Orpington-bound platform.

Adverts were placed locally for volunteers to be the sculptor’s models. The three successful applicants were Peter Lloyd, Joy Battick and Karin Heistermann, one having signed up at the station and two at a local community centre. An old ticket office on the station platform was converted into a studio so that Atherton could make plaster moulds of his three volunteers. The moulds were then cast in bronze using the ‘lost wax’ process.

Above: Figure on the now disused platform.

It is believed that they were the first sculptures made of black British people. Two of the sculptures face each other across the two platforms that are in public use. A third figure stands on the disused platform which once served the Catford Loop Line. The three figures have been placed so that they are almost in line with each other. An ugly metal fence now divides the two female figures so that the alignment is not so easy to see.

On the Victoria-bound platform is the figure of a casually dressed man, standing at the back of the platform leaning against the station’s brick wall. He folds his arms and bends his right leg to rest his foot on the brickwork. By his left foot, his bag rests on the platform itself. Opposite him, near the edge of the Orpington-bound platform is a woman holding a shopping bag in her left hand. Standing on the third platform (which is now disused) is a third figure of a woman with her sports bag on the platform at her side. The three figures are deployed in a straight line running at right angles to the track.

The whole idea of sculptures on a station is to be commended. It is to be hoped that more works of art appear on other stations in the coming years. The Docklands Light Railway (DLR) have played their part in commissioning works of art for several stations on their network but they are mainly in the form of murals. London Underground have sponsored several projects on their stations – like Sherlock Holmes motifs on the side-walls of the platforms on Baker Street Underground Station. The walls and platforms of London stations are seen by millions of commuters each year and any form of artwork to brighten up the environment is certainly to be welcomed.