Posted on 26 September 2018 by adrianprockter 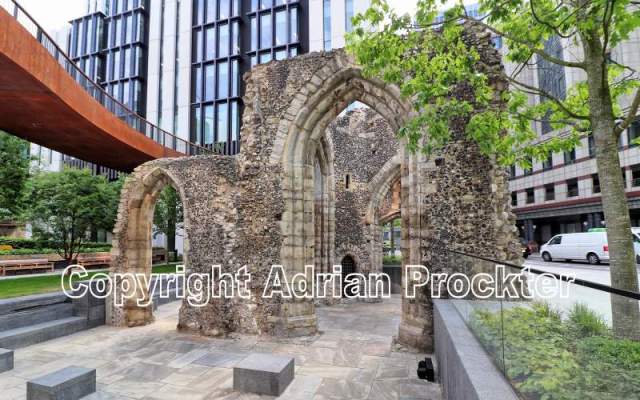 Above: Looking east at the restored ruins in the new gardens on the north side of the thoroughfare called London Wall.

It was founded as a hospital beside the street called London Wall in 1331 by a merchant (Mercer) called William Elsing. The foundation was intended as a refuge for blind beggars of both sexes, paralysed priests and, if space was still available, for beggars who wandered about the City. Initially, it housed 32 inmates, then 60 and finally 100. In 1337 William Elsing became worried about the seculars wandering about the City, so he petitioned for a replacement with regular Canons. In 1340 Augustinian Canons and a prior were elected with the assent of the Dean and Chapter of St Paul’s.

The hospital was closed down by Henry VIII in the early 16th century and the property was granted to Sir John Williams, Knight. master of the King’s Jewels. A year later, on Christmas Eve, the building burnt down. Today only the church tower remains from the original 14th-century hospital building. After being surrounded by 1960s concrete walls with no public access being possible, the new development of the adjacent London Wall Place has provided for a newly created garden area to be laid out around the ancient walls.

Having described the history of Elsing Spital, it is necessary to explain what remains on the site. The remaining walls have had a rough time over the centuries. What can be seen today has been in a ruinous state for some time. The whole area along London Wall suffered damage due to the bombing in the Second World War. After the War, a decision was taken to leave the alignment of Fore Street but to make the part of the street called London Wall (between Moorgate and Aldersgate Street) into a dual carriageway. The angle of this part of the thoroughfare was changed with the western end (at the junction with Aldersgate Street) being further south today than it was in the 1930s.

With this in mind, it needs to be explained that Elsing Spital was originally on the south side of London Wall, at the junction with Aldermanbury. Due to the realignment of the street called London Wall, the northern end of Aldermanbury has been lost and it does not join onto the new London Wall either. By the time all these changes had been completed, it was the 1960s and new ‘High Walks’ had been constructed on new walkways that were intended to become ‘the new pedestrian experience’ with shops built beside the walkways about 40 feet above ground level. However, few people ever used the walkways and none of the shots ever opened. They remained empty from the day they were built until after the turn of the millennium.

With the new development of two huge office blocks – known as 1 London Wall Place and 2 London Wall Place, the stone walkways were demolished and everything for the pedestrian now operates once again at street level. The ruins, which had been encased in a sort of ‘walled pit’ were freed from their 1960s ‘prison’ and have been sensitively surrounded by lawns and shrubbery. To cater for those who need to cross London Wall and link with other remaining High Walks further west of London Wall Place, new narrower walkways have been installed which, while functional, give the whole area a much more open and spacious feel.

A helpful inscription was to be seen on a board mounted on the railings near the ruins in the 1960s. The wording explained ‘These ruins are of the 14th-century tower of the chapel of the Priory of Elsing Spital which was incorporated into the second church of St Alphage at the time of the Reformation. The original 11th-century church, which was dedicated to St Alphage, Archbishop of Canterbury, who was killed by the Danes in 1012, lay further north against the Roman Wall. Its ruins were demolished when the Priory Chapel was taken over by the parish church. These remains were exposed when the surrounding buildings were destroyed by enemy action in 1940’. It is to be hoped that a replacement board will be added to the newly landscaped site.

While the medieval street plan was lost when the western part of London Wall was realigned, at least the new development has restored the ruins to a place of prominence amid the modern office blocks. As the area becomes busier – when the Crossrail station at Moorgate opens in 2019 – this garden area will become a place of solace as others rush between their offices and the station.