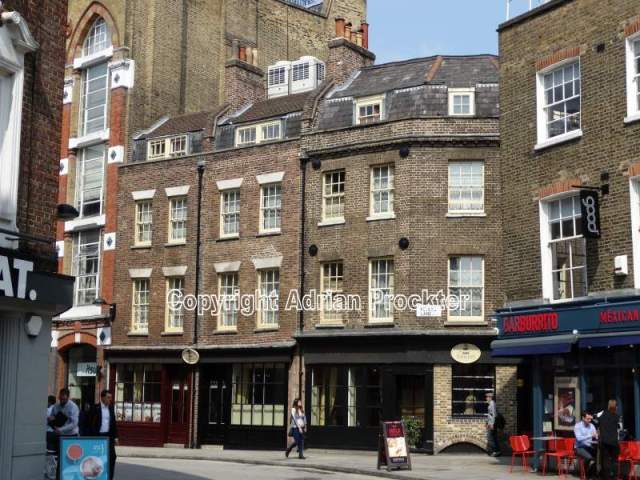 Above: The three Georgian houses in Cowcross Street that were once shops. They are now part of the hotel.

The Rookery Hotel, opened in 1998. It is one of a small chain of boutique hotels in period buildings in London. It stands with a frontage at Nos 6-8 Cowcross Street – near Smithfield. The buildings in which it is situated were several houses of various dates which were converted and extended by Gus Alexander Architects. There are three Georgian shops and three smaller Victorian houses on the west side of Peter’s Lane (formerly Nos 12–14). No. 6 Cowcross Street was built in 1780–2 for Thomas Hurford, a baker, who had earlier occupied a building at No. 5. It replaced two smaller houses, and had a chaise-house, stable and wood-house at the back with access from Fleur-de-Lis Court. The plot was roughly triangular, and the hotel has been laid out with three rooms per floor. Nos 7 and 8 Cowcross Street were built in 1798–9, when the owner was John Rodbard (or Robbard), miller, of Chigwell, Essex. They had central-staircase plans. Two large bread ovens survive in No. 7, also formerly a bakery.

For conversion to a hotel the houses were gutted apart from the roof structures and external walls and windows. They were fitted out using a considerable amount of salvaged material, including mahogany panelling said to have come from a bombed West End theatre. Each one of the 33 rooms in the hotel is named after a former occupant or an inhabitant of the immediate area.

Facia boards on the Cowcross Street fronts bear the names in fake-old lettering of tradesman tenants found in 19th century rate-books. The name Greedus on one is taken from Philip Gredus, pork butcher, at No 9 in the 1841 census. The shop fronts replace the 1970s laundrettes. 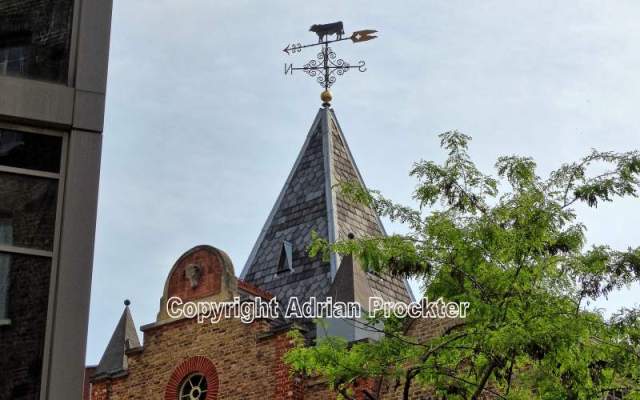 Above: The roofline of the hotel showing the slated spire and beautifully crafted weather-vane in the shape of a bull.

The splendid brick tower, with a slated spire, was built in 1996–97. The tower was built out of salvaged bricks, and most of the internal joinery was made by the remarkable Charles Jarvis of Westbury who has a unique feel for the beauty of old furniture and the ability to make it seem as though it has always been there even when much of it has been lost.

Above: Looking up at one side of the tower with the cows’ heads on the wall and the bull’s head at the top.

The brick walls of the tower were embellished with bulls’ and cows’ heads modelled and cast in glass reinforced resin by Mark Merer and Lucy Glendenning. The bovine theme was used as a decorative motif because for centuries Cowcross street was part of a route used by drovers to bring cows to be slaughtered at Smithfield. Three Hereford bulls’ heads were cast into the gables on three sides of the tower. Cows’ heads were cast into the brick piers below that on two sides of the tower.

The impression given to the passer-by is that the whole of the building has survived from earlier centuries. The houses, although internally modified, are indeed just that. The tower, of course, which looks so ‘authentic’ is barely 20 years old. The reader may well feel that there is a certain deception about the building which may well be the case. However, to have knocked everything down and inserted a modern building in a position that would have been clearly out of place would have been an even worse option. So detailed is the work of general restoration and additional building that you have to admire the skill involved (at what must have been considerable cost) in creating such a novel solution.

For subscription members there is a PDF document to view giving a more detailed look at the hotel just described and also of Cowcross Street.