Posted on 24 June 2016 by adrianprockter 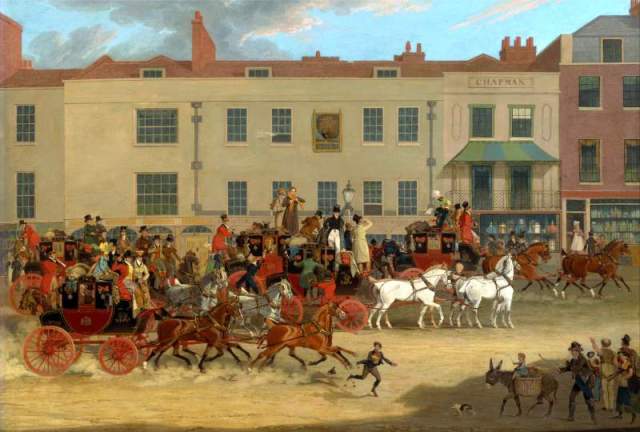 Above: A painting titled ‘North Country Mails at the Peacock’ by James Pollard, painted in 1823.

The History of the Inn

An Islington Council plaque on No. 11 Islington High Street records this as being the site of the Peacock Inn from 1564. The earlier inn, however, was further north, on the site of Nos 31 and 33, in a building that had eight hearths in the 1670s when it was run by a widow Liquorish. On the later site (where the plaque is to be seen) there have been three buildings.

The building seen at the top of this article dates from about 1700. The two northern bays, shown in Pollard’s painting were altered to provide for a chemist’s shop. They survive in carcase as No 13 Islington High Street.

By 1807 the inn had shrunk to occupy just the central five bays (Nos 11 and 11a), with John Todd, china-dealer (later cheesemonger) at No. 9 (perhaps rebuilt as a single bay); and Samuel Birch at No. 13, succeeded by George Chapman, chemist, in 1809. The freehold remained undivided.

The Peacock inn is known to have been a  stopping point on coaching routes. The Hertfordshire Almanac 1850 records: The ‘Wonder’ coach goes to the Bull and Mouth, St Martin’s-le-Grand. It returns from the Bull and Mouth, on Tuesdays, Thursdays, and Saturdays, at a quarter before two; and from the Peacock, Islington, at two.

Tallis’s London Street Views, published 1838–40 shown the building with a label below it.

According to Henry Mayhew in his ‘London Labour and the London Poor’, written in 1851, he says: the Peacock Inn as ‘now defunct’ – probably meaning that coaches no longer stopped there. It is known that it continued as a public house.

In 1857 the reduced inn was rebuilt as a substantially taller, three-storey public house with a four-bay front. This was extensively upgraded in 1888–9, and in 1931 it was replaced by the present yet taller, three-bay building at Nos 11 and 11a. At No. 13 the shopfront was replaced in 1932 for H Samuel, jewellers and long-standing occupants, by which time the first-floor veranda was long gone and slates had replaced tiles on the roof.

The entrance had a large encaustic-tile representation of ‘The Triumph of the Emperor Aurelian after the Conquest of Palmyra’. There were large plate-glass shop windows and shop fittings but it continued as a public house until 1962 at 11 Islington High Street. It is presently a shop with accommodation above. 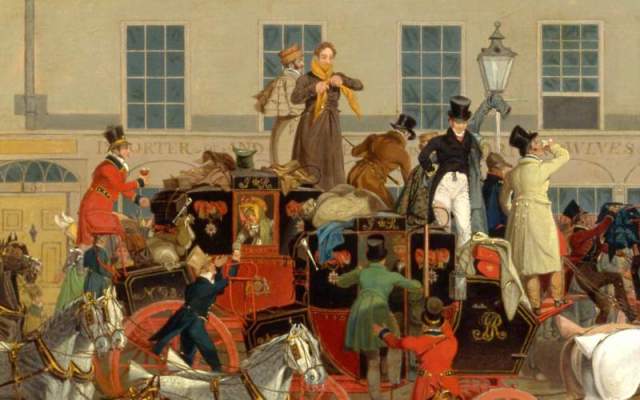 Above: Detail from the painting above. Notice the driver of the coach (in the cream coat) is taking a stiff drink to fortify him against the cold on the journey. Notice too that the guard (in the red coat at the rear of the coach) is also taking a large brandy ‘for the road’.

The Inn Described in Literature

In his novel ‘Tom Brown’s School Days’ Tom spends a night at the Peacock before catching the ‘Tally Ho’ coach to Rugby. The excerpt from Dickens is listed below:

‘Tom and his father had alighted at the Peacock at about seven in the evening; and having heard with unfeigned joy the paternal order, at the bar, of steaks and oyster-sauce for supper in half an hour, and seen his father seated cozily by the bright fire in the coffee-room with the paper in his hand, Tom had run out to see about him, had wondered at all the vehicles passing and re-passing, and had fraternised with the boots and hostler, from whom he ascertained that the Tally-ho was a tip-top goer – ten miles an hour including stoppages – and so punctual that all the road set their clocks by her.

‘Then being summoned to supper, he had regaled himself in one of the bright little boxes of the Peacock coffee-room, on the beef- steak and unlimited oyster-sauce and brown stout (tasted then for the first time–a day to be marked for ever by Tom with a white stone); had at first attended to the excellent advice which his father was bestowing on him from over his glass of steaming brandy-and-water, and then began nodding, from the united effects of the stout, the fire, and the lecture; till the Squire, observing Tom’s state, and remembering that it was nearly nine o’clock, and that the Tally-ho left at three, sent the little fellow off to the chambermaid, with a shake of the hand (Tom having stipulated in the morning before starting that kissing should now cease between them), and a few parting words.

‘Tom was carried off by the chambermaid in a brown study, from which he was roused in a clean little attic, by that buxom person calling him a little darling and kissing him as she left the room; which indignity he was too much surprised to resent. And still thinking of his father’s last words, and the look with which they were spoken, he knelt down and prayed that, come what might, he might never bring shame or sorrow on the dear folk at home.’

Dickens also mentions the Peacock in ‘Boots at the Holly Tree Inn’:

‘When I got up to the Peacock – where I found everybody drinking hot purl, in self-preservation – I asked if there were an inside seat to spare. I then discovered that, inside or out, I was the only passenger. This gave me a still livelier idea of the great inclemency of the weather, since that coach always loaded particularly well. However, I took a little purl (which I found uncommonly good), and got into the coach. When I was seated, they built me up with straw to the waist, and, conscious of making a rather ridiculous appearance, I began my journey.’ 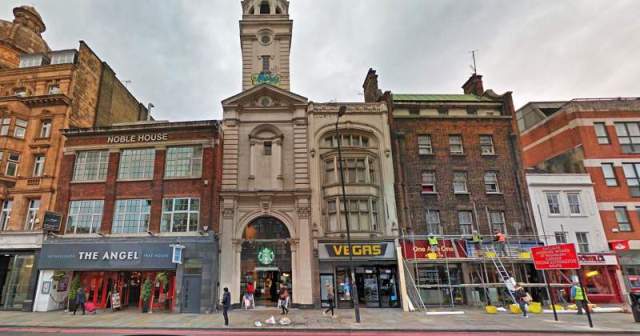 Above: At the risk of ‘deflating the bubble’, the above view was taken from Google street-view and shows part of the remaining Peacock building (with the very dark bricks and scaffolding outside) as it is today.